The band AM/FM, formed in 1986, is composed of five members, whose love of music and dedication has kept them actively entertaining thousands of fans throughout South Eastern Ontario and Western Quebec. Starting with only musical hobby as a goal, the group was always unanimous in a dress code and selection of venues in order to give their fans a classy performance. Their combined love for oldies Rock & Roll music, has lead the band to specialize in 50’s & 60’s music and has gained an appreciative following.  Since 4 of the 5 members are fully bilingual, the band also offers a good variety of French music as well. 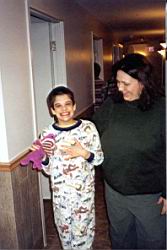 Giving their time and talent for worthy causes, in 1996 the group undertook an annual 50’s & 60’s fund-raising dance in aid of a Family Relief Home which caters to the needs of handicap children and young adults.

A chance meeting with North America’s foremost Elvis impersonator, Shawn Barry, and an invitation for him to join the band for a special appearance at their 1999 annual fund-raising dance, sparked a musical relationship which led to more appearances with the King.  Today, the band still provides backup music and vocals for selective Elvis Tribute Artists from the Ottawa and surrounding area.

With encouragement from fans and the assistance of S.D.G. Developmental Services, the Band released their first CD in June 1999.Called “Let’s Hop”, the ten song CD is a mix of good old Rock & Roll tunes that take you down memory lane. All proceeds of the CD’s, went directly toward a fund to build a new Family Relief Home for the handicapped, and continues to raise funds to help offset the operating costs of the home.

CD called “AM/FM-Live!“.  The first of a 3-CD trilogy was released in 2004, titled “Classic Hits from 1955 to 1959“.  They have also released a DVD and VHS of past performances with Shawn Barry.   The popularity of the band has grown over the past few years with performances in Ottawa, St. Jovite Qc., Brockville Riverfest, Williamstown Fair and the Rideau Carleton Raceway Casino.

In 2006, AM/FM released the second in the 3-CD trilogy titled “Classic Hits from 1960 to 1964“.  In the same format as the first, this second CD contains 2 top hits from each of the five years represented.  You can hear sample clips from this new CD, as well as many others on our Audio/Video page(click here).

In 2008, the band released the third CD in the trilogy, titled “Classic Hits from 1965-1969“.  Following the same format as the first two, this final CD in the set contains 2 top hits from each of the five years represented.  You can hear sample clips from this new CD, as well as many others on our Audio/Video page(click here).